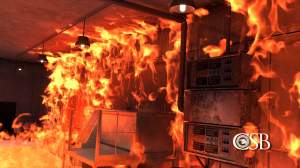 CSB Will Hold a July 16 Public Meeting in Charleston, WV to Release Investigations into the 2010 Fatal Combustible Dust Accident in New Cumberland, WV and Update the Public on Ongoing Investigation into the Chemical Leak at Freedom Industries

The Chemical Safety and Hazard Investigation Board (CSB) will convene a public meeting on July 16, 2014, starting at 12:00 p.m. in the Ballroom at the Four Points Sheraton located at 600 Kanawha Blvd. E, Charleston, WV 25301.

At the public meeting, the board will hear findings and recommendations from the CSB’s investigation team into the December 9, 2010 combustible dust explosion and fire which occurred at AL Solutions located in New Cumberland, WV. A dust explosion ripped through the New Cumberland AL Solutions titanium plant in West Virginia on December 9, 2010, fatally injuring three workers. The workers were processing titanium powder, which is highly combustible, at the time of the explosion. The meeting will also provide an update on the CSB’s investigation into the January 9, 2014, tank leak at Freedom Industries that contaminated the local water supply leaving hundreds of thousands of West Virginia residents without clean drinking water.

This public meeting is intended to provide members of the public with information into how this incident occurred and how similar future incidents can be prevented or mitigated.

Following the staff presentation the Board will hear comments from the public. All staff presentations are preliminary and are intended solely to allow the Board to consider in a public forum the issues and factors involved in this case. No factual analyses, conclusions, or findings presented by staff should be considered final until approved by a vote of the Board.

The meeting is free and open to the public. If you require a translator or interpreter, please notify the individual listed below as the “Contact Person for Further Information,” at least five business days prior to the meeting.

The CSB is an independent federal agency charged with investigating industrial chemical accidents. The agency’s board members are appointed by the President and confirmed by the Senate. CSB investigations look into all aspects of chemical accidents, including physical causes such as equipment failure as well as inadequacies in regulations, industry standards, and safety management systems.

The Board does not issue citations or fines but does make safety recommendations to plants, industry organizations, labor groups, and regulatory agencies such as OSHA and EPA.