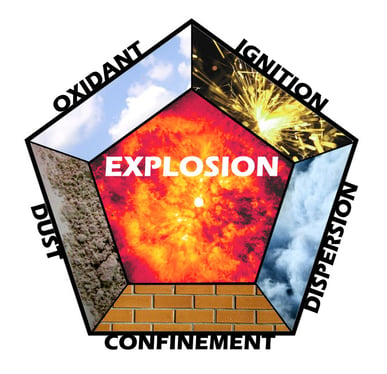 For a fire to be able to burn it needs to have three things present simultaneously: Fuel, Ignition, and Oxygen. Take away any one of these and you cannot have a fire. In fire safety this idea is known as the ‘Fire Triangle’, and is commonly used to help avoid industrial fires.

To understand a combustible dust explosion though, two more elements need to be added to the fire triangle to create the ‘Dust Explosion Pentagon’. The two new elements are Confinement and Dispersion. These elements are created when the fuel, in this case combustible dust, is spread out as a dust cloud within a closed area, such as a factory or warehouse. Much like with the fire triangle, taking away even one of these elements can remove the risk of a dust explosion; however the risk for a fire can still be present.

The elements that make up the Dust Explosion Pentagon are:

A fire needs Oxygen to be able to burn, and this explosion element is present practically everywhere. It is in the air workers are breathing in the facility and outside, in the pressured air being used for cleaning, and in closed rooms unless they have been sealed and emptied of oxygen.

Since oxygen is a component of air and is necessary for workers to breathe it is also the hardest element to remove from the explosion pentagon.

This is what actually causes the other elements to combust and create a dust explosion. The ignition source can range from something as small as a static electricity spark or lit cigarette, or a spark from metal parts scraping against each other. It could even be created when something just gets hot enough to ignite something nearby.

This element can be contained to some extent by removing any open flames or potential for sparks to be created. It is also important to make sure machinery is clean and not getting too hot when it is operating. However, it is next to impossible to completely remove the risk for an ignition since it can be caused by such varied sources. No facility can completely ensure that there will be no static or other accidental sparks.

This is what actually ignites and provides a source for the fire or combustion to continue burning. In traditional fires this is something like wood or paper, and in some factories even piles of accumulated manufacturing dust will catch fire and burn. In a dust explosion it is the airborne dust that is providing the fuel and causing it to change from a fire to an explosion.

This is when the accumulated dust is spread out over the air and creates a dust cloud. This can be caused when daily activities disturb accumulated dust and send it airborne, such as sweeping, exhaust from machinery, or cleaning using compressed air. Another cause of dust dispersion is when a small primary combustion occurs and sends shockwaves throughout the facility. These shockwaves can knock down dust that had settled on rafters, pipes or HVAC ductwork and spread it throughout the air. Once it has been dispersed this dust can change from the initial fire to an explosion almost immediately.

Preventing this element from becoming part of the explosion pentagon is to simply clean any accumulated dust to prevent it from having the possibility of becoming dispersed. A dust collection system can be used to prevent large buildups from constantly occurring, but these need to be properly cleaned and maintained. Dust within these systems ignites easily, and creates a fire that is difficult to control and put out.

Much like with removing the fuel from the explosion pentagon, having the facility professionally cleaned by people following NFPA combustible dust protocols is an essential step in preventing a disaster.

When the dust cloud is contained within a closed area, which can be as large as a warehouse or factory, it causes issues with confinement. Dust particles can remain suspended in confined air for days, causing the density of the dust cloud to be constantly increasing. When the dust cloud combusts, the confinement will cause intense pressure to build and push the explosion through every corner of the facility. Confined dust explosions have had the power to lift roofs from buildings or buckle solid concrete floors.

In the case of the Imperial Sugar dust explosion, being confined pushed the explosion through tunnels and halls that led it to other confined dust clouds. This caused a chain reaction of combustions, destroying the building and claiming several workers’ lives.

This is also a difficult element of the explosion pentagon to control, since working in a facility means it has to be a closed area. Environmental issues prevent manufacturers from releasing accumulated dust into the outside air, which means it stays confined inside the building.

Contact Hughes Environmental if you need to have your facility cleaned to remove the fuel from the dust explosion pentagon. Our technicians are OSHA trained and use explosion proof vacuum cleaners when handling combustible dusts.